Catalonia’s government temporarily avoided collapse on Thursday after an affronted coalition partner opted to consult its members on its future following the sacking of its most senior official.

Nearly five years after Catalonia’s disputed independence referendum, the coalition was plunged into crisis when the president fired his deputy over bitter disagreements on how to pursue the fight for secession.

The move by regional president Pere Aragonès against his vice-president Jordi Puigneró, the head of junior coalition partner Together for Catalonia, underlined the depth of divisions in the independence movement.

Both coalition partners support independence for the wealthy Spanish region, but Aragonès has infuriated the more radical Together party with his moderate approach, which has included opening talks with the central government on resolving differences with Madrid.

After a marathon meeting lasting more than nine hours, Together’s leaders said on Thursday night that they would consult party members on October 6 and 7 on whether to stay in the government. “We have the utmost respect for our affiliates,” said Laura Borràs, party leader.

The referendum on October 1 2017, which was declared illegal by Spain’s top court, triggered a national crisis and unified separatists against Madrid after the central government rejected it and sent in police from other parts of the country to disrupt voting.

But in the years since, the independence movement has fractured as the prospect of secession has diminished.

Aragonès sacked his vice-president late on Wednesday after Together accused the president of not doing enough for the separatist cause and threatened to call a vote of confidence against him in the regional parliament.

In a statement on Puigneró’s firing, Together said: “This historic mistake endangers the future of the independence movement.”

If Together decides to pull out of the Catalan coalition, there is no guarantee new elections would be called because Aragonès and other political leaders have signalled they believe the surging cost of living and energy crisis make it the wrong time for a vote.

Instead, Aragonès’s Republican Catalan Left (ERC) could continue to rule in a minority government, but one that would struggle to gather enough votes to pass legislation, including a budget seen as essential to combating the effects of rampant inflation.

Together said it would also send a set of demands to Aragonès, including limiting the Catalan government’s talks with Madrid to the subject of Catalan self-determination and a possible amnesty for leaders convicted for their role in the 2017 referendum and later events. 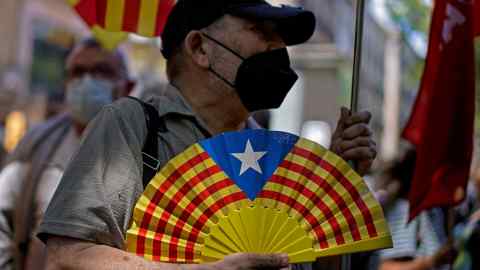 The latest opinion polls indicate that a majority of Catalans do not want to break away from Spain. Fifty-two per cent of people were against independence and 41 per cent in favour, according to a September survey by the Centre d’Estudis d’Opinió, the official Catalan polling agency.

The anti-independence Catalan Socialist party (PSC), which is the region’s most popular political group, according to recent polls, said both ERC and Together were “in injury time”.

“They are thinking only of themselves and wasting the time of the Catalans,” said Salvador Illa, PSC leader, in an interview on Catalan radio.